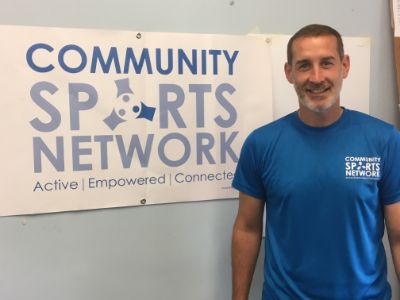 I got my first coaching badge at the age of 16 , UEFA level 1 in football when I was playing for Wolverhampton Wanderers. But I have been coaching and facilitating as a job for the past 17 years in various organisations as well as a volunteer coaching with Larne youth.

I was lucky enough to be scouted for Wolverhampton wanderers when I was playing for the Northern Ireland U15 schoolboys team and moved to England the following summer to become a professional footballer, I spent 3 years at Wolves before moving to Bolton Wanderers where I would spend a further 3 years playing under Sam Allardyce before joining Swindon for 18 months and 12 months at Yeovil town. I returned to the Irish league and spent 10 seasons playing for Coleraine, Ballymena and Carrick Rangers as a player-coach before going on to manage the club. I spent 1 season at Larne Tech Old Boys (I’’M FROM LARNE!) where I started playing with my best friends and I would still consider myself a fan of the LTOB….We got promoted but I left the following year to join Michael Hughes at Carrick and begin my transition from playing to coaching/managing. During my playing career I was lucky enough to pick up representative honours for Northern Ireland at U15,16,U18,U21,U23,B  –Irish league representative team, Junior international team, and during my spell playing for LTOB I was selected for the NI Amateur league representative team.

I enjoyed  2 and a half seasons as manager of Carrick Rangers, winning the 2014/15 Steel and sons cup on Christmas day which was a fantastic experience , we would go on to clinch the 14/15 season Championship title and gain promotion to the Irish Premier League and to top off a fantastic season we also won the Intermediate cup to record a historic treble and were voted junior team of the year at the football writers awards. The following season we managed to secure our Premier League status with an injury time winner on the last day of the season. I would leave Carrick at the end of the season and took up the manager’s job at Glentoran FC  in September the following season where I spent 18 months as manager.

I’m currently the Football development manager for Larne FC academy overseeing the coach development, having gained my UEFA Pro license qualification I run CPD days for all the coaches at Larne academy passing on knowledge I have collected throughout my playing and managerial career.

I have also represented golf Ireland at junior level when I went over to Patshall Park in England for a 3 day tournament when I was 14 years of age having qualified from Cairndhu and then Mullingar to get to that stage.

I joined in 2015 and have spent the last 4 years working for the company.

I have really enjoyed the diversity of the work with the company, and the number of fantastic groups we get to work with. I have a real soft spot for the Older & Active group I had at Charter in Sandy row – they were brilliant characters and how they looked out for each other and bond within their community was special. I have loved working with Orchardville, young people with learning difficulties at Lagan village, the fun and enthusiasm always leaves me feeling energised and grateful to be working with such a great group of brilliant kids. If I had to pick one programme in particular that I have worked on, I would say the Maghaberry programme has given me the greatest sense that our work can make a difference, and how our work allows us to make a connection and become a positive role model in that person’s life that may lead to them making better decisions in the future.

The diversity and opportunity to work with some fantastic groups and partner with some highly skilled agencies to continue to learn and improve at what we do.

Football is and always will be my first love! It has given me so many great memories, friendships and opportunities and now my son is exactly the same. I can only hope he gets half the enjoyment out of the game that I have got. I do love my golf too though!

I loved Michael Jordon as a young sports person because of his ability to totally dominate his game, and raise the profile of his sport – I’m not a massive basketball fan but when he was at the Chicago bulls I knew every player and watched all their games!!! I love Rory Mcilroy cause he’s from here and one of the best players in the world, same as Carl Frampton, Joey Dunlop and George Best; all recognised at world level for such a small country. We punch massively above our weight!
Currently, Gareth McAuley is a big source of inspiration to me , he’s a good friend of mine but he gave up his full time job to chase his dream of being a full-time player and when he scored at Euro 16 for NI having played the previous season in the premier league for West Brom …… I think he showed everyone that if you believe in yourself and are willing to make the sacrifices to get what you want to achieve … anything is possible!